January 24, 2010, tripod mount, looking over cyclone fence at top of 300+ step stairway. “Punta de los Reyes… God help the hapless mariner who drifts upon her shores.”Point Reyes juts out ten miles into the sea and before the lighthouse was put into service in 1870, more than 50 ships entering and leaving the San Francisco Bay were lost on the rocks of Point Reyes along with nearly a million dollars in cargo and many passengers and crew. 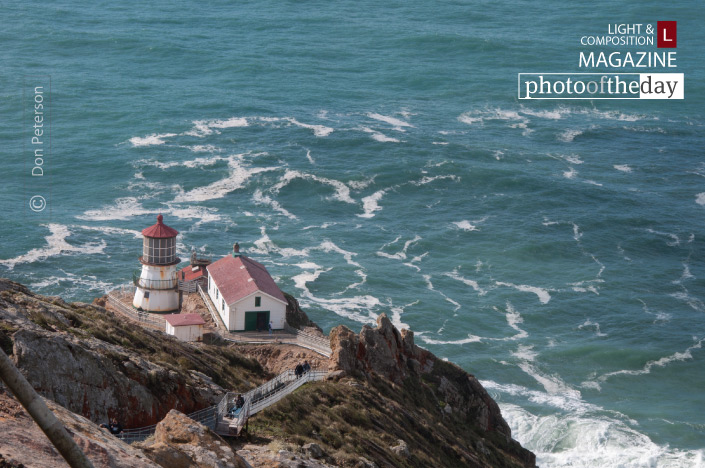 Photographer: Don Peterson (Rio Vista, California, USA) Registered
Don Peterson has been making photographs since he was a teenager when he was given a Rolieflex 2.8C camera by his grandfather. Then he continued to make photographs during high school and later when he enlisted in the Air Force, spent some time in Europe and used a Canon Canonet 35mm, shooting mostly Kodachrome slides. When he returned to the “real world” in 1966 he adapted to the status quo, eventually marrying and raising two sons. He was an industrial production line mechanic for most of his working career and the camera seemed to take a back seat for most of those years. He retired at the age of 57 in 2001. At that time he had been taking photography at College of DuPage in Glen Ellyn, Illinois and with the freedom that retirement offers he decided to attend full time.
After graduating with an Associate Degree Peterson transferred to Columbia College Chicago, and in 2007 at the age of 63, he graduated with a BA in Photography. Shortly afterwards he sold his house in St. Charles, Illinois and hit the road with his golden retriever Geordy in a pickup truck and 26-foot travel trailer. Now, almost six years and several thousand miles later he own a motor home and continue to travel with a new pup seeking new experiences and interesting places to photograph. He maintains a blog of his travels at http://www.don-peterson.com/roadrunner.

All in the Details, by Tisha Clinkenbeard
Subscribe
Login
0 Comments
Inline Feedbacks
View all comments
Changeable Lizard, by Nazmul Shanji