The photograph was taken at the Ekushey Book Fair of 2013, the month long festival of February where Bangladesh celebrates its Mother Language Movement of 1952, inspired by which the International Mother Language Day is observed all over the world. Here two of the greatest Bengalee poet’s words are written in golden letter. The upper lyric says, “Tell your mind, good or bad apart, accept the truth with ease”. It’s by Rabindranath Tagore, the first non-European to win the Nobel Prize in Literature in 1913. The second one is by Fakhir Lalon Shah, the Baul Saint of Bengal. Truly they are GOLDEN WORDS. These, like prayers, have inspired Bangladesh in times of crisis and cry. 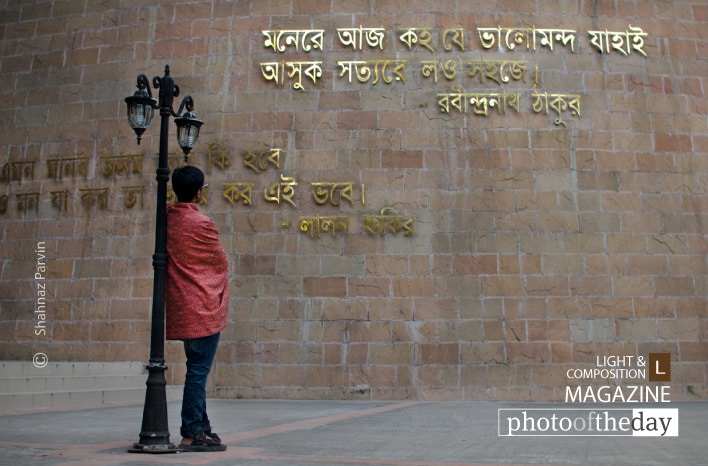 Fishing in the Forest, by Rahat Azim Chowdhury

Stand for, Stand With

The Puller, by Shahnaz Parvin

an image as a thought viewer!! nice.

Thinking and selection of the subject is most vital part in photography, or Art of photography…this simple but strong wall words depict a ventilation of mental condition..I think so.great work with a simple weapon.

Crossing my Path, by Nilla Palmer
Scroll to top wpDiscuz