October 25, 2010, hand held, an ancient abandoned sleigh stands in silent witness to better times in Bodie. Bodie was founded in the mid-1860s when gold was discovered in the nearby mountains. It was considered to be California’s second or third largest city at one time boasting a population of about 10,000 people. It eventually became a rip-snortin’ town of gambling, alcohol and prostitutes which eventually contributed to its demise. It is considered one of the best preserved ghost towns in California as it sits in a state of “arrested decay.” 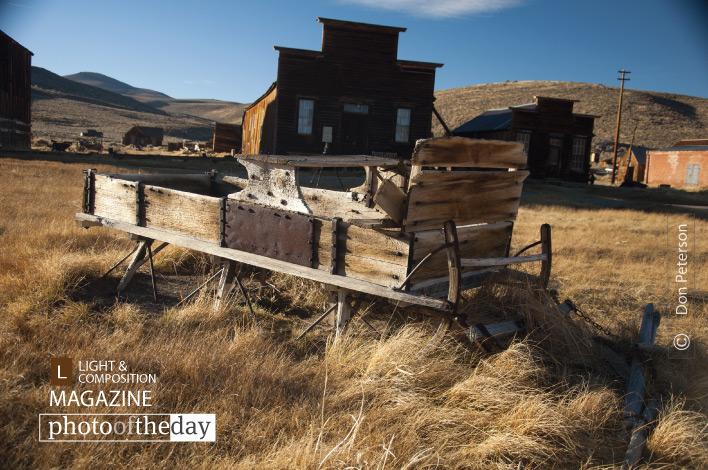 Photographer: Don Peterson (Rio Vista, California, USA) Registered
Don Peterson has been making photographs since he was a teenager when he was given a Rolieflex 2.8C camera by his grandfather. Then he continued to make photographs during high school and later when he enlisted in the Air Force, spent some time in Europe and used a Canon Canonet 35mm, shooting mostly Kodachrome slides. When he returned to the “real world” in 1966 he adapted to the status quo, eventually marrying and raising two sons. He was an industrial production line mechanic for most of his working career and the camera seemed to take a back seat for most of those years. He retired at the age of 57 in 2001. At that time he had been taking photography at College of DuPage in Glen Ellyn, Illinois and with the freedom that retirement offers he decided to attend full time.

After graduating with an Associate Degree Peterson transferred to Columbia College Chicago, and in 2007 at the age of 63, he graduated with a BA in Photography. Shortly afterwards he sold his house in St. Charles, Illinois and hit the road with his golden retriever Geordy in a pickup truck and 26-foot travel trailer. Now, almost six years and several thousand miles later he own a motor home and continue to travel with a new pup seeking new experiences and interesting places to photograph. He maintains a blog of his travels at http://www.don-peterson.com/roadrunner.

Inside your own 10, by Ronnie Glover

The Struthious Syndrome, by Siddhant Chauhan

Clark Fork River in the Snow, by Tisha Clinkenbeard

Sunrise on the Beach, by Marina Hof