Dubai Fountain is considered to be the biggest in the world… Thousands of visitors come daily to watch the dancing fountain doing spectacular shows. It was a rainy day, and people were hiding under the roof of the mall when these 3 friends came outside under a single umbrella… They were determined to take a closer look so they huddled and made their way to the fence laughing. Even though they were the only people watching closely, the fountain kept on performing one show after the other. 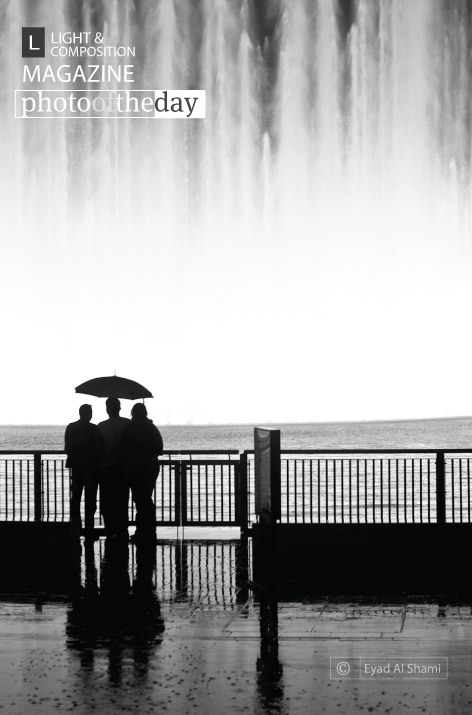 Photographer: Eyad Al Shami (Dubai, United Arab Emirates) Registered
Born in 1976 in Jerusalem, Eyad Al Shami grew up with the tend to try different hobbies including Pool, Chess, Music Instruments, Diving, Card Magic, Bowling. But photography was the most serious one when he bought his first camera in 2000, it was a point and shoot that he carried with him everywhere… He was fascinated with low light and night shots, street and nature… However the serious journey started with his first DSLR “Canon 450D” in 2007 that his wife bought him on their anniversary, since then it was never the same… Continuous reading, dedication and practice is what he was focusing on since that day… he believes there is still so much to learn and apply but practice is always the key.

He is working in IT industry sales which is a demanding career, so is photography… Finding time to go out and shoot is one of his challenges, that’s why he don’t spare time during his travels as he always shoot what appeals to him. Photographing Kids/ Street and Low Light scenes is what he loves and will one day adopt one of them as the main path in his photography journey.

Out of Syllabus, by Nirupam Roy