During the peak of the perseid meteor shower on 12th of august 2012 I went out to Noordwijk, The Nederlands to shoot a time-lapse of the night sky until sun rise. Here is the result of that time-lapse layered with starstax: http://vimeo.com/47416535. During the blue hour after having spent a rather chilly night watching meteors and with one camera still shooting the time-lapse I decided to warm up by taking some shots of myself spinning a newly finished light painting tool consisting of a flashlight with an opalescent plastic ball attached to it on a string. 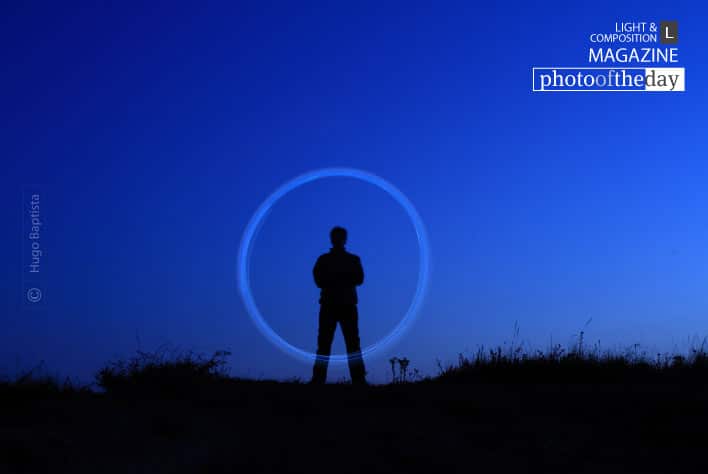 Photographer: Hugo Baptista (Voorburg, The Netherlands) Registered
Hugo Baptista is a freelance 3D animator, Visual Effects artist, Video producer and Photographer. Born in South Africa from Angolese parents, he has Portugese nationality and is currently residing in the Netherlands. He is a pragmatic autodidact constantly experimenting with all kinds of visual arts; exploring the boundaries of each field; learning by trial and error. Having worked most of his career on computer graphics trying to replicate reality he has found that it’s irreplaceable.

With his light painting photography work he has the opportunity to design a scene as if it were a 3D canvas, starting with an idea, finding balance in colour and performance, playing with symmetry and searching for simplicity that can be expressed in a complex way. Theoretic knowledge of light acquired during his professional career has contributed to a photographer with intricate knowledge of how light works and how we perceive it. In a professional world dominated by specialisms he considers himself a jack of all trades, and a master of all.

This is brilliant, and a classic! Nice job, Hugo.

It is a cool,bacause of the bleu,but also a very clear photo, for me , kind of show’s who YOU are.

Thank you Robert, my dear friend. I value simplicity and have a predilection for circles as you know so indeed, this self-portrait couldn’t be more me.

0
Reply
The Most Sacred Place, by Ahmed Al.Badawy