When visiting Ang Thong National Park you not only experience breathtaking landscapes but also fully colored facilities around like this pier. In general, Thailand trip is a festival of colors, with which you can brighten your memories by reviewing pictures when coming back home. Ang Thong gained widespread renown when it appeared in the novel ‘The Beach’ by Alex Garland, as the destination where backpackers in search of a secret island utopia set up camp. The subsequent movie starring Leonardo Di Caprio was actually filmed on Koh Phi Phi, but by then Ang Thong was firmly in the imagination of many as an appealing holiday escape. Only one of its islands, Koh Paluay, is inhabited, home to a sea-gypsy community that largely maintains its traditional fishing lifestyle. 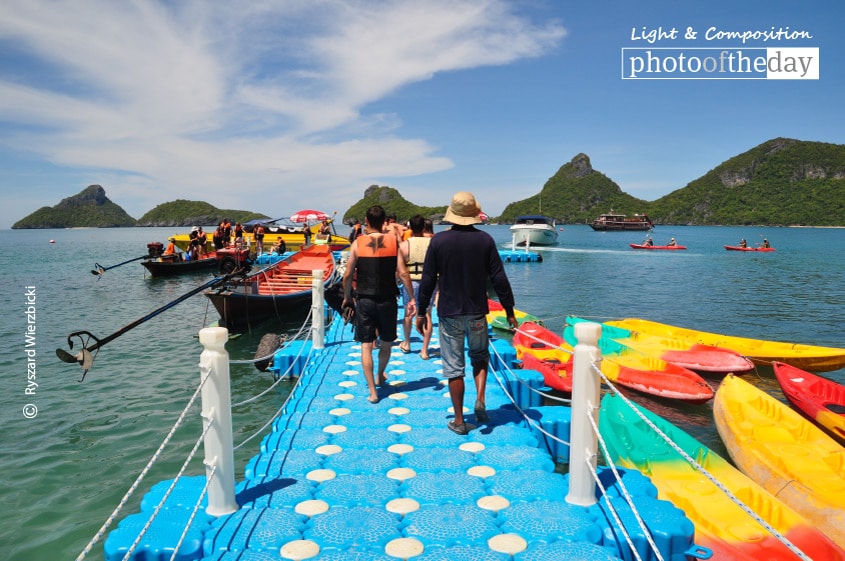 Photographer: Ryszard Wierzbicki (Swindon, United Kingdom) Registered
Born in 1963, Ryszard Wierzbicki is a graduate of University of Gdańsk in Poland, and completed his master degree of Social Sciences in Children Care Education in 1992. He worked in an orphanage and four other companies, where he served the positions of Educator, Marketing Specialist, and Sales & Marketing Manager in various branches including child care, dentistry, orthodontics, and IT. Apart from his regular jobs he continued developing his Scuba Diving qualification resulted as an instructor level in PADI. After emigrating to UK in 2006, he began his real travel and photography experience. He loves to explore South-East Asia, where he volunteers occasionally with Stu and the Kids charity organization of Thai and Burmese Orphans (stuandthekids.org). He established two forums for active travelers and photographers named Instant Travelling (instanttravelling.ning.com) and World Around (worldaround.co.uk) in 2010. Changed to an ironed suit and laptop for cargo trousers, hoodie jacket, and knapsack, Ryszard have been managing freely the passion of photography, traveling, and scuba diving. He is now self-employed as Marketing Advisor and Tour Organizer, happily divorced, and has no kids.

Before Migration, by Ryszard Wierzbicki