Traditional folk play from Kashmir. The word bhand owes its origin either to a humorous play categorized in the Natyasastra as bhan, or to bhand (comic actor). Pather (or Pathar) comes from patra (character). The agricultural and largely the Muslim community of the “bhands” travel from village to village, particularly in the harvest season, and collect rice paddy, money, and clothes for their performances. An improvised play around social issues, bhand pather ridicules invaders and members of the ruling class, like the Pathan Pathar from Afghanistan, the Raja (King) Pathar, and Mala (Priest) Pathar, whose lust, avarice, and deeds of exploitation are exposed. Though there is no written script, the actors use dance, music, clowning, buffoonery, and mimicry to create powerful satires on shared social concerns. The open-air performances begin with a prelude by six musicians playing the shehnai (wind instrument), naqara, anddhol (both percussion). After this about six dancers perform, followed in turn by four mimics who enter from the audience encircling the performance area, and then serve as narrators through the performance. Spectacular but simple theatrical devices mark the play, like the transformation of a half-curtain into a canopy suspended on poles. With the emergence of political insurgency in Kashmir in the late twentieth century, performances of bhand pather have become increasingly rare and the survival of its artists is threatened. 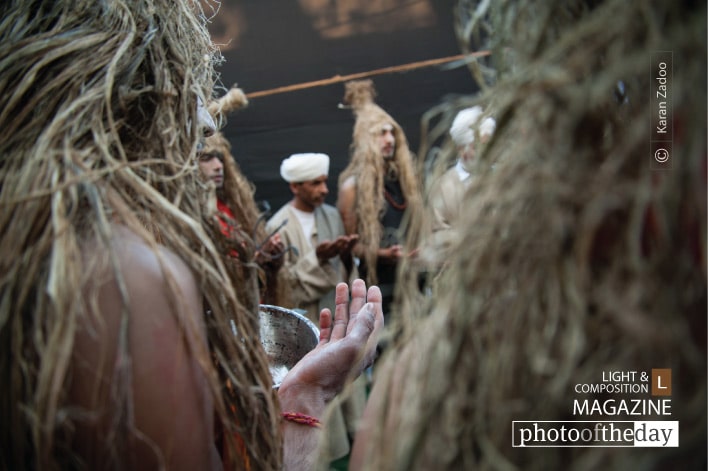 The images on the transformation zone where I was astonished to see an ordinary human becomes a character and the most interesting thing is that they don’t have a planned script or anything, they rather do it by their regular stories and experiences of life. It end with a supplication for grace to their creator Allah. This image was the description and the display of this man how happily is he involved with his supplication.

Photographer: Karan Zadoo (New Delhi, India) Registered
Born in Srinagar, Jammu and Kashmir photographer Karan Zadoo came to Delhi with his parents as a young boy. After getting educated in Delhi and taking a job with an advertising agency the life of marketing executive and the harshness of a job with little love returned was the turning point in his life. Karan left his agency, returned home and left for a long vacation to the hills (Himalaya). That’s where he realized his love in exploring new things getting close to nature or any beautiful unexplored or explored travel destination. Even a village or anything would do just backpacking. Delighted to realize his dream but yet he also realized that he needed to figure out what he could do to help his dreams get established in life. Zadoo noticed that everywhere he went there was a DSLR/SLR camera on each and every tourist. That gave him a thought to experience and become a Photographer for which he came back to Delhi and started learning and understanding the role of light in writing with a camera and lens which included aperture, shutter, ISO, white balance & so on and on… Amazed and thinking what a lucky person he was to be aware of all that he learned. Even after six years of capturing images Zadoo still gets a certain thrill when taking pictures that he cannot be express with words. Even with no idea about the dark room maybe because he touched the camera at a later age when the darkroom was pretty dark and replaced with rooms full of computers and software like Adobe and all. Zadoo relies on his Nikon cameras D200 and D700 which accompany him on every occasion. Throughout his travels across the country Zadoo has learned that the eclectic range of people throughout India offers untold photographic opportunities, whether it’s from the back lanes of Delhi or the hills of Himachal stories are waiting to be captured. With a love of landscapes, food and people India offers the perfect backdrop. Whether capturing people at a place where they are dressed to the occasion like a fair or festival or their respected state and place where they belong is what gives the audience a feeling of that person’s life and way of living in his own small town and village or a state or any place. These moments also aspired Zadoo to understand the documentation of certain people in their life like many others photographers do. Learning Photography is based on endless tries and unlimited pictures and you can never be called the best or ace because every time you grow things turn on table. As a photographer Zadoo always wants to be learning and evolving with his shutter release and the photographs he takes. Zadoo says “To make it simple all I can say that photography has changed things deep in my thoughts and I want to be one of the decent photographers of this time.”

Know the Kolbars by Moslem Azimi