The photograph is from Bangladesh, the country where International Mother Language Day originates from. If you trace back its history, you’ll know the blood that Bangladeshis paid for earning the right to talk in their mother language. 61 years have passed since Bangladesh’s language movement of 1952, but still the war criminals of 1971, the Liberation War of the country are not brought into justice. Now, in 2013, a spontaneous and peaceful mass movement has spread all over the country asking for capital punishment of the war criminals. Here in the photograph, a young freedom fighter of the new generation is captured lighting candles in the memory of the martyrs of the language movement, as if symbolizing the on going war for justice, handed down from one generation to another. 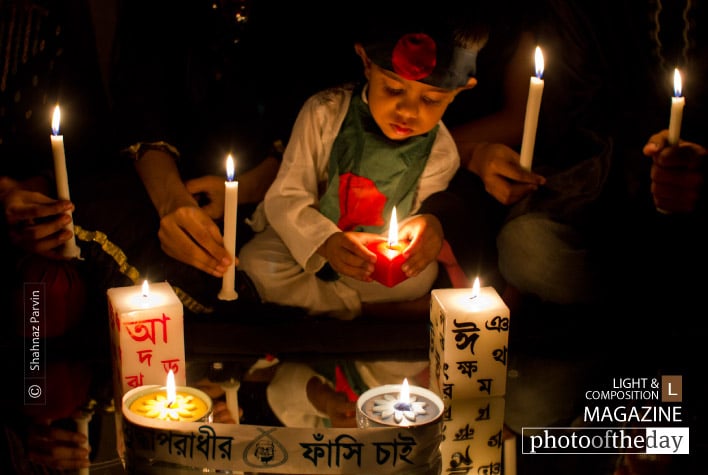 Photographer: Shahnaz Parvin (Dhaka, Bangladesh) Registered
Shahnaz Parvin is an Award-Winning Photo Journalist. She is a passionate Bangalee, and resides in Bangladesh. Though she is doing a job as system admin in a PSI company, her real passion is in photography and learning it. Shahnaz mostly loves documentary photography, and loves to represent her country Bangladesh through her lens. With the highest number of Photo of the Month and Photo of the Day Awards, recently Shahnaz joined Light and Composition from March 2013. Covering upheaval, conflict, places, people, and culture, she is the new Media Head for Asia.

Heal the World by Alessandra Gargano