The shot is taken in Udaypur sea beach in New Digha in West Bengal at around 5.40 a.m., when the local fisher men were going to the sea to put the ‘Sareen’ (a traditional and popular way of fishing) on the Sea as it is their occupation to maintain their family. At that time they were just waiting for the pulling out of water as it highly depends on high-low tides. There is the risk, but they must have to go wining over all odds of life. They find sea as their means of earning. I was lucky as I got that opportunity to capture the moment. 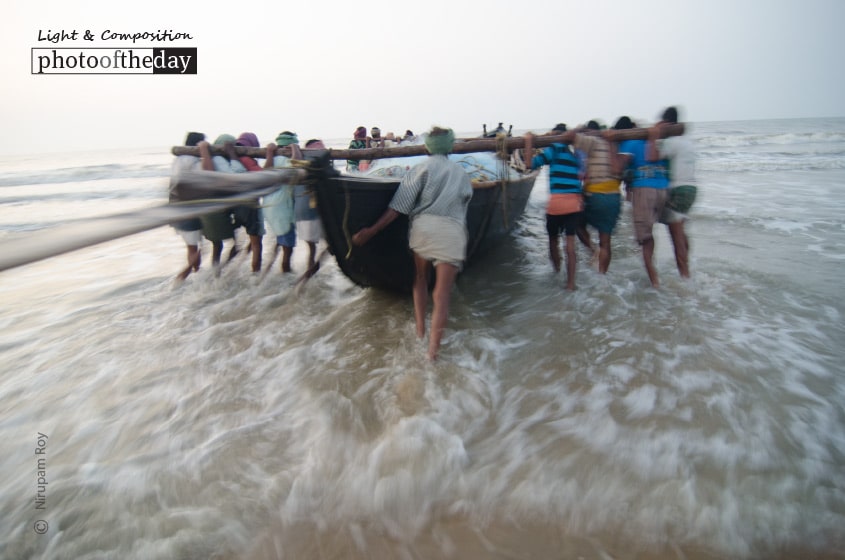 Life in Unpredictability, by Anjan Patra

Is this their daily routine? If I travel there, do you think I can get photographs like this?

No, it is not completely true.I admit, but there are also some clean beaches in India.

Indian tourists will not let you take photos. Don’t go.

No, this is not correct. Actually out of curiosity, perhaps they created trouble in your shoot. And you faced the problem. But it does not happen everywhere. People are friendly here. I hope that your next tour will be smooth enough. Thank You.

Yes, of course. You can get. It is their daily activity. But the time depends on the ‘sea tide’. I was lucky that it happened in dawn.

Combination of Nikon D7000 with Tokina 12-24mm seems going well? Have you taken any other photographs in that combination?

Yes. Actually, I wished to take Tokina 11-16 f2.8, but at that time due to my monetary condition I took that one. Yes, I am using it for 2 years. In Light and Composition, few of my selected photographs are taken by that lens. It works. Thank You.

I never heard the name of this sea beach. Everyone talks about Cox Bazaar.

Yes, it is in Bangladesh. My one is in India, WestBengal. It is on the border of two states – Orrisa and WestBengal in India by the side of Bay Of Bengal.

I think Tokina 12-24mm does the tricks. I am going to have that lens.

Thank You but it is up to the judges.

How did you make your hand steady at 1/5 second?

It was very tough though I managed it somehow. Perhaps at that time my determination to take that shot helps me a lot. Infact, at that time I have no other choices and in rushing and splitting using of tripod was next to impossible. Thank You.

Roy, this surely is an amazing capture.

0
Reply
To a Newer, Brighter, and Better Bangladesh

Tomb of Hatshetput, by Sanjoy Sengupta
Scroll to top wpDiscuz