Took this photo in the early morning at the Pushkar fair, the largest animal fair in the world. The fair is located in hilly region of Pushkar district of Rajasthan. Every year thousands of cattles mainly the camels are brought from different parts of Rajasthan for trading. The fair ground becomes a spectacular scene with true color,culture and tradition of Rajasthan. Pushkar fair has become one of the good choices of photographers from various parts of the world. I was roaming in the vast fair ground. Numbers of traders was waiting for their business to be started for that day. This man was standing in such a gesture that i liked most. 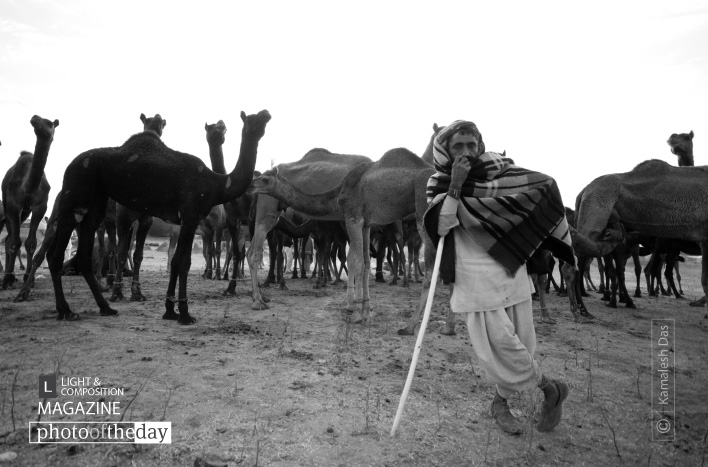 Photographer: Kamalesh Das (Cooch behar, West bengal, India) Registered
Kamalesh Das is a 30 years old school teacher, who was born and brought up in the beautiful city of Cooch behar, west bengal, India. It is a small yet prosperous city in the foothill of Bhutan and Himalayan mountain region. He started photography after joining his service. At that time he used to take photographs of his family gatherings and some of his travel. One day he saw a DSLR of his friend, took few photographs by it, and then he took the decision of buying a DSLR of his own. It was Nikon’s D40. He took major photographs with it. From landscape to macro from portraits to composition work, he tried every genre of photography with it. Quite a few yrs ago he upgraded to Nikon’s D90. Kamalesh travels a lot within his country. He believes that there is huge space in working in India and there is no use of going abroad. What he sees through his eyes, he tries to frame it in his camera. Till today he used to see good photos and recharge his energy for good work. Every click in his shutter is a new for him as his past experience gets challenge over there. So he always tries to think different to get new.

Mr Everybody, by Ali Berrada