The Red Arrows, the aerobatics team of the Royal Air Force, is usually a nine aircraft team but only eight planes can be seen in this image and this is due to the tragic demise of one of their pilots, Flt Lt Jon Egging. Flt Lt Jon Egging’s Hawk T1A aircraft crashed near Bournemouth Airport. These images were captured during the Airshow at RAF Leuchars in the September of 2011, less than a month after this incident. This image is a tribute to the pilots, past and present, of the Red Arrows also referred to as The Reds. 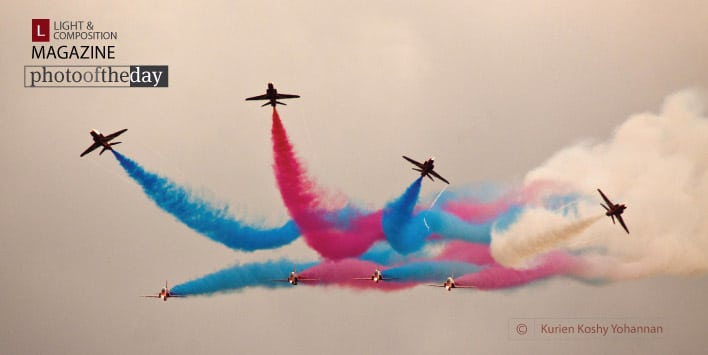 Photographer: Kurien Koshy Yohannan (Edinburgh, Scotland)
Photography started off as a hobby for Kurien Koshy Yohannan but now it plays a major role in his life – so much so that he plans to slowly start making a living from it. Koshy believes there is so much beauty around us that can be captured; nature is full of beauty waiting for us to capture it, if we have the eye and receptiveness for it. Koshy intends to capture this beauty through his camera lens for all to enjoy and behold. Through his photography he would like people to appreciate the world we live in – the animal and plant life that coexist with us as well as the people and cultures that surround us – and hopes that it may provide a renewed enthusiasm for people to safeguard the beautiful planet that we call Home.

I Fly, by Akash Bhattacharya

The Dancing Beauty, by Sandeep Nair