I made this picture in November 2009 while on a 4WD trip in New Caledonia. I took it in a beautiful place called Hienghene on the east coast of the main island (Grand Terre). The photo is a 30 second night exposure and you can actually see stars showing through the sky. The rock in the background appears on the 500 franc note in French Pacific territories and is thus known locally as ‘Billet 500’ 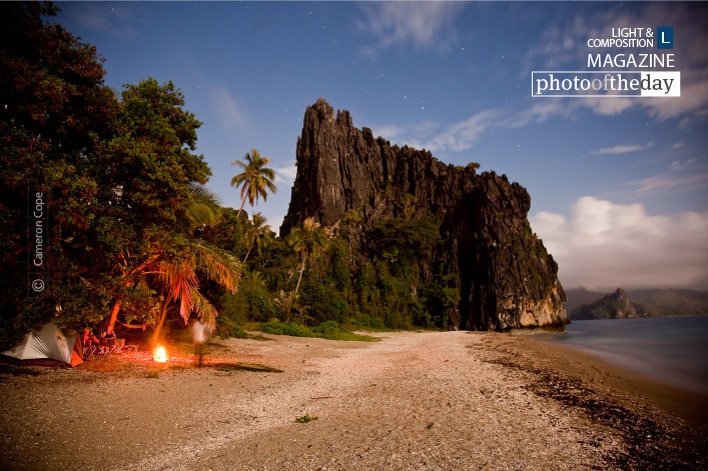 Photographer: Cameron James Cope (Melbourne, Australia) Registered
Cam Cope is an emerging photographic artist originally from Gippsland in Victoria (Australia) who works on travel and documentary projects. Cam spent much of his youth engaged in visual arts, but in his academic years explored history, film, environmental studies and Spanish language. Through extensive travel and academic exchange he developed a passion for the legacy of colonial history, indigenous culture and environmental issues. His early professional career was in environmental consultancy in Melbourne, though in 2009 Cam began developing a new way to express himself from behind the lens. His projects are both personal and collaborative in nature while his broad experience allows him to engage meaningfully with a variety of subject matter. His goals are to explore his creative vision, connect with different cultures, contribute to public debate and engineer platforms for people to tell their own stories.

Cam has had travel work published in Get Lost Magazine and Backpacker Essentials, and has received recognition in multiple photography competitions. Photographs from his collaborative work with the Mullett family (of the Gunai/Kurnai Indigenous community of south-eastern Victoria) have been acquired by the Melbourne Museum for their permanent collection. The year 2012 represents an important moment in Cam’s burgeoning career with a series of debut exhibitions planned to showcase his photographs from a variety of projects.

The View from the Hill, by Ryszard Wierzbicki

Midst of a Setting Sun
Scroll to top wpDiscuz