The photo is taken an early morning in Dhaka in July 2011. There is a steady monsoon rain, and the kids love to play outside in the rain. One of the most commonly used playing tools for kids in Dhaka is white polystyrene plates. The kids are living in an urban slum in Dhaka city, which is one of the fastest growing mega cities in the world. Approximately four million people are living on the streets and in slums in Dhaka city – about one third of the city’s entire population. 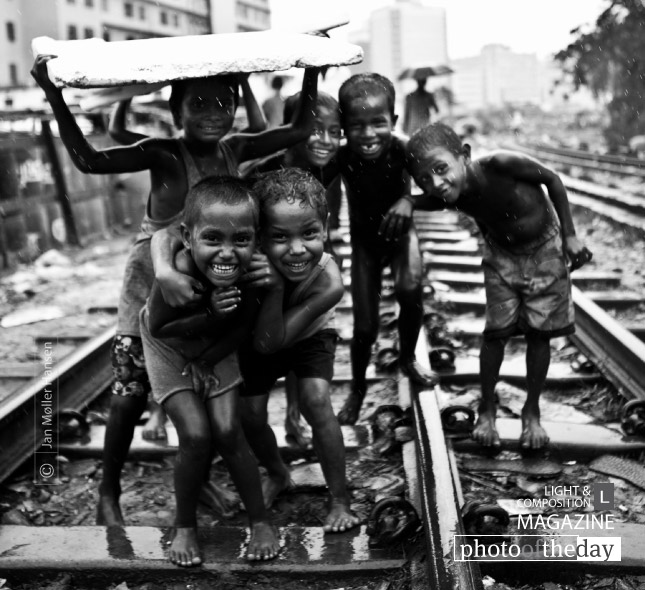 Photographer: Jan Møller Hansen (Dhaka, Bangladesh) Registered
Jan Møller Hansen is a self-taught and passionate photographer with a main interest in people and their lives. His work is mainly based on social documentary and street photography. He is a diplomat and development practitioner and presently serves as the Danish Deputy Ambassador to Bangladesh. His interest in photography stems from international development assistance, diplomacy and travelling in Asia and Africa during the last 25 years. He has lived and worked four years in Nepal (1991-1995), four years in Vietnam (2000-2004) and by now more than four years in Bangladesh.

Jan Møller Hansen holds a MSc in Civil Engineering (water resources) from the Technical University of Denmark (1989) and a MSc in Human Resources Management from the University of Manchester, UK (1996). He also has diplomas in coaching, executive management and tropical hygiene and medicine from institutions in Denmark.
Photography helps in getting closer to reality and it connects. Good photographs are for him the ones that often stand best alone without words and provoke thoughts and feelings with the viewer. He uses the best cameras and lenses from Canon, even though he only sees technique and equipment as partial elements of the photography process and its outcome. Timing and connection together with light and motion mean everything. Photography is completely unpredictable and very often a big surprise. He loves the interaction with people and the surroundings. When it is practically possible he often brings the equipment on travels in various parts of the world.

Most of his recent work has been done in Bangladesh, where he presently lives and work. During the summer 2011 he visited North-Western Greenland in the Disko Bay area from where he made a series of photographs. Jan believes, the universe is the infinity of never returning moments. Just existence. Photography can capture a moment in this infinity that will never reappear. He hopes that one does enjoy these moments and the told or untold stories behind.

Gossiping of the Shadows, by Biplab Arahan Majumder