With sunny blue skies, the Sheikh Zayed Mosque was a sparkling diamond in the desert. As I walked through the Mosque while appreciating its stunning architecture, what struck me most is the pool of water situated next to the entrance. The water was in its fullest blue color which made the reflection of the Mosque’s wall look very beautiful. I was fortunate to capture this beautiful reflection. 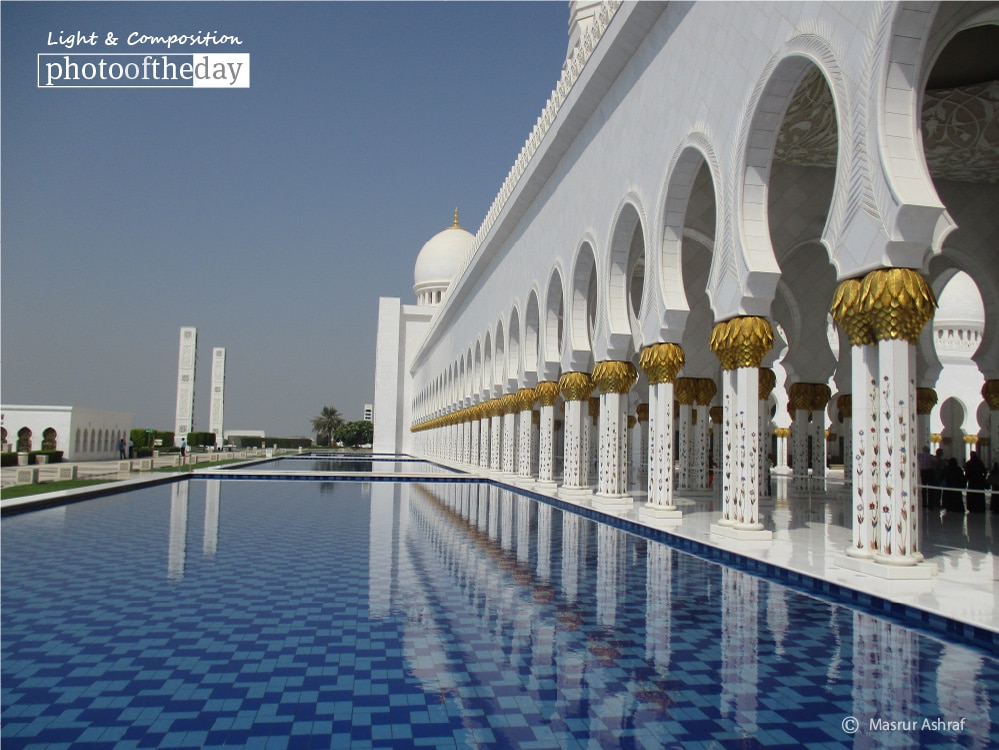 Photographer: Masrur Ashraf (Dhahran, Saudi Arabia) Registered
An Indian national, Masrur Ashraf was born on the 12th June 1982, in the eastern city of Saudi Arabia – Dhahran. He has earned two masters degrees in Telecommunication Systems and Management & Marketing from DePaul University in USA and KFUPM in Saudi Arabia respectively. He is currently working as an Investment Promotion Coordinator in a semi-governmental institution. Masrur’s photographic journey started at an early age when he picked up his father’s vintage Canon AE-1 SLR camera and set out take numerous family pictures. Since then, Masrur’s photographic journey grew longer as he expanded his focus to other types of photography such as landscape, rural life, and travel. He also went a step ahead by purchasing the Canon EOS 7D camera and using it to hone his photographic skills. Masrur is extremely passionate about rural/countryside photography. Being from a village in the Indian state of West Bengal, he is blessed to have the opportunities to take numerous pictures of the beautiful landscape, the people and, most importantly, the life a countryside offers. His aim is to show the humbling beauty of an Indian village to people around the world. Photography is more than a hobby to Masrur. It does not cease to amaze him about the richness and dynamism of photography especially the fact that a picture can convey a message or many messages depending on a person’s perspectives. As the saying goes: a picture is worth a thousand words. To Masrur, that’s an understatement.

The Resilient Trees, by Masrur Ashraf