One day, while on a vacation, I was trying to shoot few flowers in the Hotel’s Garden. There were charming flowers everywhere. I was shooting them with various angles and perspectives, but none of them quite satisfied me. Then suddenly I saw this beautiful little white flower with a striking bright yellow portion in the middle. I decided to shoot a macro of this but it was too small for my lens’s macro capability. I wanted to focus right in the bright yellow part and keep the entire white petals throughout the frame. This was possible only by using an extension tube. The extension tube allowed me to go more up close as I wanted. And finally I got satisfactory results. 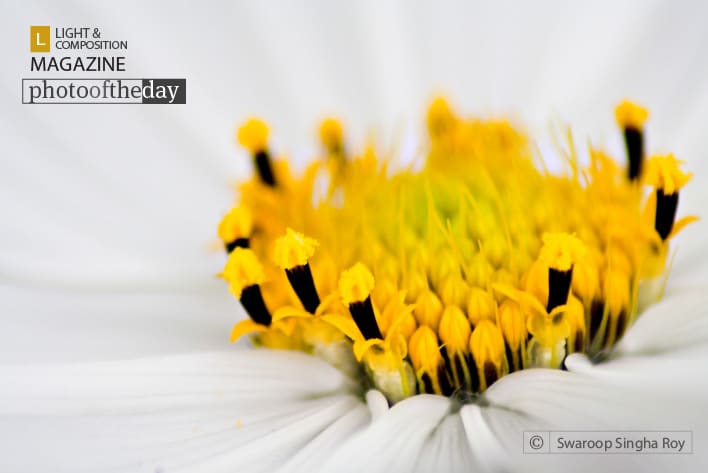 Photographer: Swaroop Singha Roy (Kolkata, West Bengal, India) Registered
Swaroop Singha Roy – A shutter bug from Kolkata with a knack for music and wildlife. A funny, happy go lucky boy who loves to Love the beautiful creations of nature. The innocent animals have a special place in his heart. Since his childhood, Swaroop had this habit (maybe a bad habit) of snatching a camera from his dad and trying to figure out which button makes the “Snap” sound! Then, the day finally came when he got his first camera – yes, it was a film-roll one, and that was the day he realized he needs to do something big with this. Now, armed with his digital photographic stuff, he loves to go around the city, village or anywhere in this big beautiful world and shoot at sight. Photographing Animals is what he likes the most. Photography to him is a means of expressing his thoughts .

The Girl whose Name I Forgot, by Prasanta Singha

For a Greener Progeny, by Kamalesh Das
0 reviews