This photo was taken on February 5, 2011, in Kenai, Alaska. Recent solar activity and clear skies prompted me to head to a dark portion of the city, away from light pollution. I stood in -10F (-23 C) in temperatures, watching the aurora borealis (or, the Northern Lights) slowly dance on the northern horizon. Just when I was thinking about packing it up and heading home for the night, the auroral activity began to increase dramatically. Waves of green light began to dance overhead. I shifted my gaze from the North and saw this scene to my West. The aurora almost seemed as if it was interacting with the surroundings, as it appeared to highlight the frosted trees and dip down just above the snowy road. 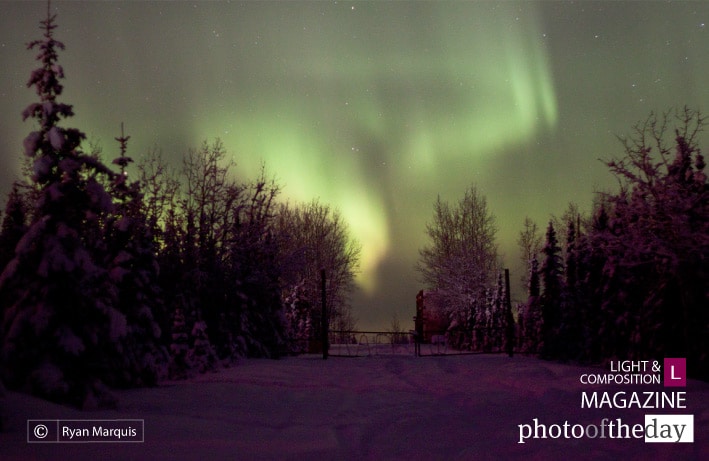 Photographer: Ryan Marquis (Kenai, Alaska USA) Registered
Since discovering the potential that a DSLR camera offers, Ryan Marquis has rarely been seen without his camera in-hand. Ryan Marquis’ photography focuses on landscapes and wildlife in its natural habitat. Ryan considers his camera to be an extension of his eyesight and photography as a way to share those views, and enhance his senses of the natural world around him. He lives in Kenai, Alaska which provides easy access to unexploited wilderness and untamed wildlife. The long and cold Alaskan winters offer him the opportunity to photograph the aurora borealis and winter landscapes, while the summers offer nearly 24/7 daylight to capture Alaska’s rich flora and fauna. He augments the photos on his photoblog by writing about the subjects in the image, oftentimes providing scientific and historical context for his subjects. In addition to landscape and wildlife photography, Ryan experiments with time-lapse videos and astrophotography.
Web Links:

At the Water’s Edge, by Ronnie Glover
5 reviews