“Cazuela” was taken in the afternoon in October 30th 2011. My wife Elizabeth and I had traveled to Ecuador, my country of origin to visit family and friends and relax at the beach in Playas one of the many beautiful towns populating the coast of Ecuador. Our friends convinced us to try a typical dish called cazuela, named after the clay dish it is served in. Elizabeth and I were initially a little apprehensive due to the fact that it was prepared in a very “folkloric” facility (street food). We decided to try it, and it was delicious. I snapped a photograph in the same style I use for the pictures I take to promote the restaurant through social media here in the USA. Trying to emphasize the texture and color of the main protein in the dish while letting other ingredients fade out of focus, kind of the same way they would in your mouth after you take a bite. 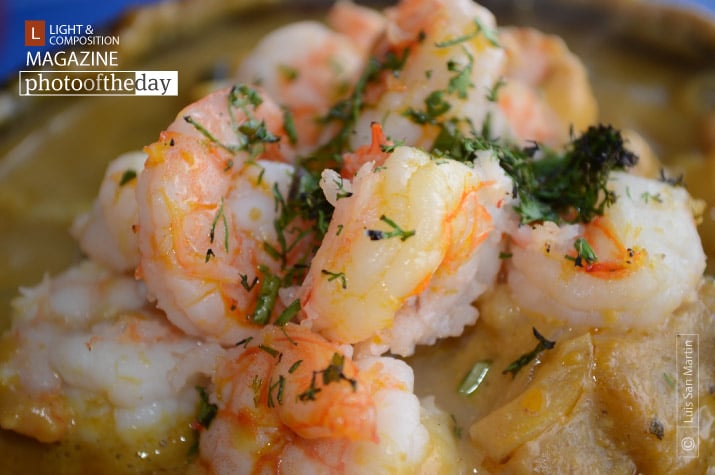 Photographer: Luis A. San Martin (Phoenix, Arizona, USA) Registered
Luis A. San Martin is originally from Guayaquil, Ecuador. He moved to Chicago in the United States when he was 22 years old, where he became immersed in what would become one of the biggest passions in his life, Food and Beverage. Having worked in many different restaurants from the bottom up, he is now have opened a few different restaurants in cities like Chicago and now Phoenix Arizona where he is currently reside. It was through this industry that he met his wife Elizabeth, the biggest reward this fantastic world has yielded. Recently while wanting to elevate the quality of the pictures they were using in social media and the website of one on his restaurants, he purchased a DSLR camera. Little did he knew he was going to find a new craft, one that he is becoming more passionate about everyday. Luis is exited to learn more about this world and become immersed in its community and culture.

A Rite of Passage
1 review