Sometimes during autumn the light conditions are stunning. I was waiting for the moment the clouds allowed the sunlight to break through. It took a while, but nature performed a fascinating light show guided by the fast moving clouds during the sunset. I almost forgot to press the shutter to be able to share one of the greatest moments. 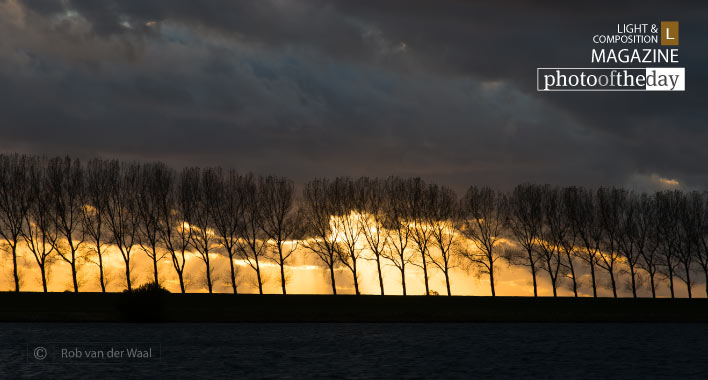 Photographer: Rob van der Waal (Hellevoetsluis, The Netherlands.) Registered
Rob van der Waal was born in 1957 in Rotterdam, The Netherlands. His father was a passionate photographer who taught him the basics of photography. When he was 7 years old, his family already had a darkroom on the top floor of their family house. His dad was on the edge of what was possible those days, using 2 Leica M3 bodies, and was developing black/white and color films by himself and with some modifications to his equipment, created images of 40x60cm. Apart from his father’s touch and some workshops, Rob van der Waal is an autodidact. With reading, listening and most of all just doing, he developed his creative and photography skills. To briefly summarize his style in photography; pure and honest are the key words that come close. He loves to be out in nature and enjoys the space, light and birds, and on those frequent trips his camera is his companion. He believes, some interest build into his DNA is “maritime”. It’s his preference to be at the waterfront, the sea, and close to ships and its related activity. He feels fortunate to live close to Rotterdam, a harbor area in the Netherlands. He will always respect nature and animals. He hopes more people will support this principle. What triggers him in photography is that, it is never done, complete or finish, as there is always a way to playing with the light and the moment, which gives the opportunity in another way to tell the story!