I took this photograph of the carpenter bee at Chittagong. Though usually I am not interested to take insect photos, but that day when I saw this bee I decided to take photo due the color of its wing. It’s beautiful. When I took the shot I even didn’t know the name of it, later one of my friends confirmed me the name “Carpenter Bee.” They most of the time traveling between the nest and the flowers from which they obtain food. 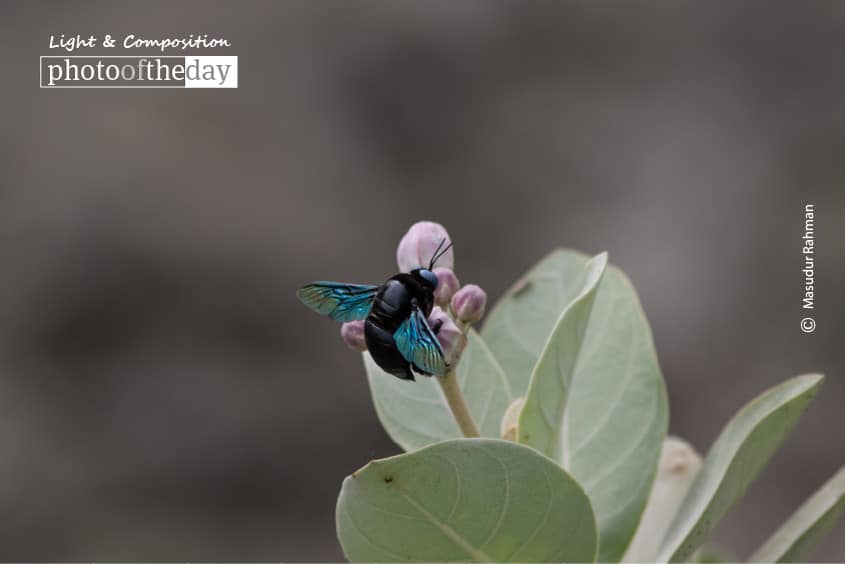 Photographer: Masudur Rahman (Chittagong, Bangladesh) Registered
Photography is a passion of Masudur Rahman Mamoon, which he started back in 1998. Initiated with portrait photography using a film camera, Mamoon was unable to give time, due to his work in RMG sector. In 2007, when he had started his own business, he managed to give more time, especially in wildlife photography. Mamoon was born on 15th October, 1967, and completed his post-graduation in Marketing from Chittagong University. He believes that photography can give freedom of expression and can bring positive changes into our lives and society. He loves wildlife photography, especially bird photography, for which he traveled many places across the country. He is one of the members of Chittagong Bird Club (C.B.C). His bird photographs and writings publish in local newspaper weekly.