The first one is a shot extracted from a session focused on Soft Air, a sport which imitates military techniques and strategies, which I have realized in August 2010 in a decommissioned military zone. The session developed in the morning, and the main difficulty was the lighting management to obtain the result I had in my mind: the final mood had to be as similar as possible to a shooter game. In this military zone there were two little tunnels opened at both sides and absorbed in the vegetation. The thing to which I pay attention the most during the phase of location research, is the texture of the background and the lines of convergence, but also the lighting of the area. In my opinion the subject must be as important as the background which frames it indeed. In this case the tunnel was really a fantastic place, and I think that the idea of shooting in the inside of the construction came into my mind in same the moment in which I saw the model soldier entering the tunnel: I would call it “love at first sight”. 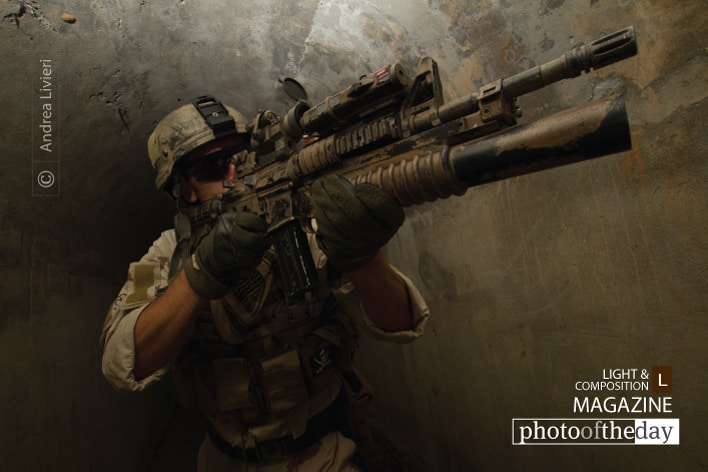 Photographer: Andrea Livieri (Venice, Italy) Registered
Andrea Livieri lives in Venice and is a musician who started with the profession of guitarist and electric guitar teacher at professional level in 2000. In summer 2009 he started to become very fond on the world of photography, and he realized that photography is a hard and true passion. From that moment he has never looked back! Andrea started with a self-study career, investing inch by inch on professional gear, reading up on many books and lingering over the creative and emotive aspects of photography. He still devote a lot of time to in-depth examination and testing of the photographic technique, supporting the ideas he want to expand. Making music and shooting are both part of his daily therapy, which keeps him in balance between real life and obsessive frenzy, and of course photography has become a natural extension of his passion for the arts. For those who want to know something more about his musical activity too, the following one is the link to his official site: www.andrealivieri.com

Eyes Are a Reflection of Character by Aleksey Kogan