Macro photography opens up a whole new perspective, this yellow flower was so tempting and inviting with the pollen sticking out of it. Such opportunities sometimes disappear as the day ends, since some flowers tend to shut down at the end of the day so I had to make it quick, If I can see this then so can the bee. 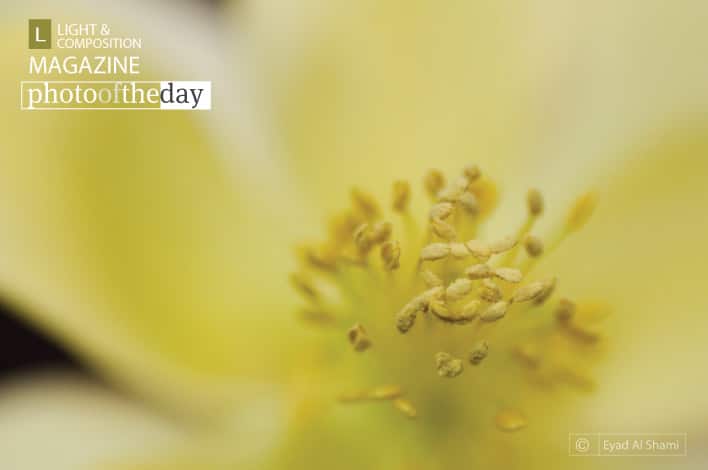 Photographer: Eyad Al Shami (Dubai, United Arab Emirates) Registered
“Born in 1976 in Jerusalem, Eyad Al Shami grew up with the tend to try different hobbies including Pool, Chess, Music Instruments, Diving, Card Magic, Bowling. But photography was the most serious one when he bought his first camera in 2000, it was a point and shoot that he carried with him everywhere… He was fascinated with low light and night shots, street and nature… However the serious journey started with his first DSLR “Canon 450D” in 2007 that his wife bought him on their anniversary, since then it was never the same… Continuous reading, dedication and practice is what he was focusing on since that day… he believes there is still so much to learn and apply but practice is always the key.
He is working in IT industry sales which is a demanding career, so is photography… Finding time to go out and shoot is one of his challenges, that’s why he don’t spare time during his travels as he always shoot what appeals to him. Photographing Kids/ Street and Low Light scenes is what he loves and will one day adopt one of them as the main path in his photography journey.”

In the End by Kirsten Bruening

Watching You, by Diep Tran

The Crab That Played with the Sea, by Rezawanul Haque

Everything Has Its Beauty, by Mazhar Hossain

Photo of the Month | 17th Month
Scroll to top wpDiscuz